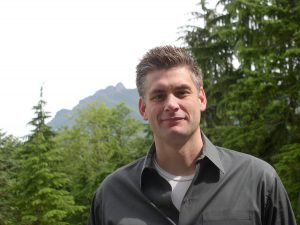 Over a long career as a professional artist and designer, Jon Cannell has made his way from the deserts of Arizona to the Pacific Northwest. Jon earned his BFA at the Art Center College of Design in Pasadena, California before moving to Washington state to raise his family. That group consists of a happy menagerie of his spouse, three kids, a cattle dog named Red, a flock of ducks and chickens, and two Nigerian dwarf goats named Rosie and Violet.

Jon is influenced by the sleek lines of midcentury and Scandinavian design.

“I don’t have a favorite designer, but I am influenced by the pattern work of Marimekko and Lotta Jansdotter.”

These clean, modern elements show up in his work, which includes designs for Pinhole Press as well as fabric and pattern design. He is also an accomplished children’s book illustrator.

During his time away from work, Jon might be trying to sneak a peek at the film set for Twin Peaks. “We live very close to where they filmed the original as well as the new series on Showtime,” he says. He also enjoys traveling with his family, particularly to locations that highlight the desert scenery of his youth.